Let Us Cling Together, Again

Confession time, this review won’t be without bias. Ever since Square Enix announced this remake/remaster of Quests 1995s SNES classic Tactics Ogre, I’ve been begging everyone I know to play it. It has been one of my favorite titles, and favorite things ever since I picked up the PSP version in 2011, so bear with me as I gush about this game.

Tactics Ogre has always been credited as the grandfather and the crown jewel of the Tactical RPG genre, even if here in the West, it had been overshadowed by the equally brilliant Final Fantasy: Tactics. What makes Tactics Ogre stand out, even today is not only how well it plays after a modern overhaul while its core is still intact but also because it tells a story that puts even modern titles to shame.  Don’t let its cutesy sprites and Anime-Esque portraits fool you. Tactics Ogre goes to some very dark places within its fantastical, well-fleshed-out world.

The story of Tactics Ogre is one of its most iconic aspects. Set in the aftermath of a messy civil war, the player takes on the role of Denam a young resistance fighter. Denam and his sister Catiua lost their father in a massacre and swore revenge on the dark knight Lancelot. And what starts off as a simple revenge story quickly turns into a complex web of lies, deception, and good intentions.

The tale takes influence from the Yugoslavian Wars, and Tactics Ogre goes to great strides to make its atmosphere heavy and oppressive. This is not the tale of a young man becoming a knight, saving the kingdom, and being celebrated as the hero who overcame all the odds. No, Tactics Ogre is a tragic tale that reminds us that war is war and there is nothing glorious about it.

Tactics Ogre will often remind you that doing the morally right thing isn’t going to reward you with good boy points and better equipment. More than once, you’re gonna suffer the consequences of being a good person or you have to live with the overwhelming guilt of your decisions. Suddenly “Let Us Cling Together” sound like a great suggestion because, in times of hardship, it is the only thing we can do.

And if you want to feel even worse about your actions, I highly suggest seeking out the Warren Reports of all the incidental characters you come across. Every commander of a small army, every bounty hunter or bandit, you might come across as a fleshed-out backstory. It’s a gentle reminder that everyone you encounter is a person like yourself, no matter how despicable. They will be mourned when they die, maybe even more than you. The game won’t let you forget that you pave the road to victory on the bones and broken hopes of others.

I don’t really want to spoil any more here because experiencing this story without really knowing what you’re getting into is probably the best way to experience it. And thanks to the Chariot System from the PSP release, you can go back and live through the consequences of other choices you could’ve made. Commit to your mistakes and pay attention to the dialog.

While the gutwrenching story puts Tactics Ogre already at an all-time classic for me, it’s the combat system that makes me sink a casual 100+ hours into it every time I replay it. It is simple and complex at the same time and even after having sunk so many hours into it, I still haven’t gotten bored of it. That is also thanks to the few changes and tweaks that have been made to the PSP version.

Let’s start at the character screen. You can customize your party as much as you want. The system isn’t super deep but gives you enough to tinker around with every single aspect of every single character. Now classes are no longer bound to a character. You can switch up your party composition as much as you like. Do you want to have a party full of tanks that can bulldoze through the enemy? Or do you want to let lose an army of the undead and beastmen? If you can dream it, you can do it.

Characters can be equipped with all kinds of weapons and spells, which you’ll, of course, have to provide. If one of your characters dies in the field, you’ll need to recover their stuff and find a suitable replacement. Of course, you’ll want everyone to survive, right? This goes for named characters as well and it will influence some of the later possible story paths. So you’ll have to plan ahead carefully and be prepared for the worst.

Battles themselves happen on a large grid with various elevations and obstacles that affect movement. Characters take turns and move along the battlefield and you have to juggle your entire army at once. You can also rely on the more than competent AI to make your life a little easier. Equipment and class dictate how your characters move and fight.

Archers are really good at picking off enemies from afar but are almost useless against anything in armor. But they’re really useful for getting healers and mages out of the way early. Meanwhile, mages don’t have a lot of health but can deal huge amounts of damage. You have your knights and clerics but also more unique classes like the terror knight or the dragoon, which you can unlock throughout the game. Some of these classes are locked behind one of the many story paths you can take as well as special characters.

While battles in Tactics Ogre can take well over half an hour, you always have interesting choices to make. With the skill cards that drop randomly throughout the battle, you can make a more risky move for a damage buff or a guaranteed critical hit on the next attack. Some people don’t like that change because it makes the even battlefield messier than it already is, but it also gives way to more interesting choices the player has to juggle and it adds an extra level of strategy.

Compared to earlier versions, there are no more random battles, instead, you can just train without risking any of your valuable troops. And your characters will always be capped at a level until you clear the next major story hurdle to keep the difficulty consistent. This is nice in theory but Tactics Ogre will sometimes throw a curveball at you and make some battles way more difficult than what you’re used to. And since you can’t just restart battles unless you get wiped out, it forces you to commit to mistakes you might’ve accidentally stumbled into.

On top of being fully voiced in English and Japanese, Tactics Ogre has also received a full orchestral soundtrack by the original composer with some new tracks between the remasters of old ones. It sounds amazing but I would’ve wished that there was also a way to play the original music as the beeps and boops of it have already seared themselves into my mind and I’d like more people to experience it.

The voice acting of the English cast is phenomenal as well, not in doubt thanks to the amazing new localization that gives the whole script a more theater-esque feel. And the English cast acts out with the kind of energy it well deserves. My little criticism is that there is no English translation for the Japanese dub, which has some slight changes in character. For example, in the Japanese dub, Catiua is a bit more reserved, which can grate a little against the script even if the content is largely the same. 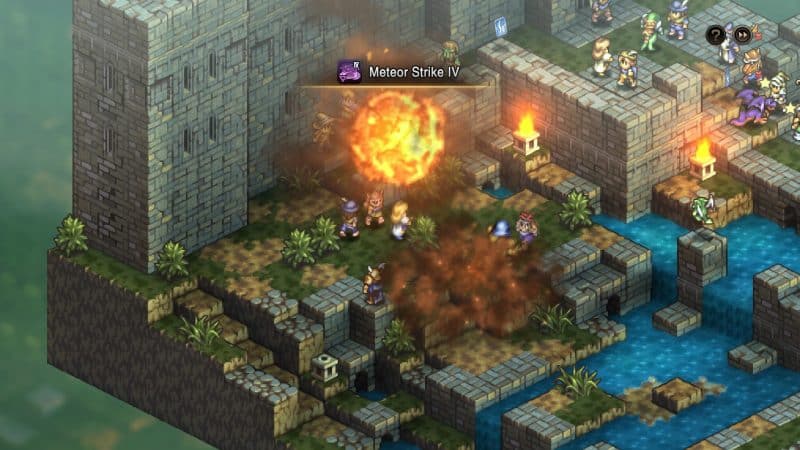 A Work of Art

There has been extensive debate over the visuals of this remake/remaster. A lot of people seem to prefer the HD 2D look of titles like Triangle Strategy and Octopath Traveller, which I personally hate. I don’t want to play the Unreal Engine overshadered, asset flip version of games that look like what I’ve played on my dad’s crusty Super Nintendo. I want to play those games in a modern resolution with a few more colors added to them with modern gameplay tweaks.

And while I will always prefer the crusty look of the Tactics Ogre’s SNES outing, the smoothed-over character sprites of the PSP version with an upscale are still nice enough. And they look a lot closer to Akihiko Yoshida’s art and to me, that’s all that matters. The areas you fight in, however, look beautiful in this look. They have that right mix of looking handpainted on hardware that severely limited its visual aspirations.

And then there are the character portraits. Uh yea, Akihiko Yoshida is one of my favorite artists working in video games and his artwork to this day is just incomparable. And if you are a fan of his work, I highly recommend checking out the anime movie Maquia: When the Promised Flower Blooms on which he did the character and visual design, and it’s directed by the equally brilliant Mari Okada. 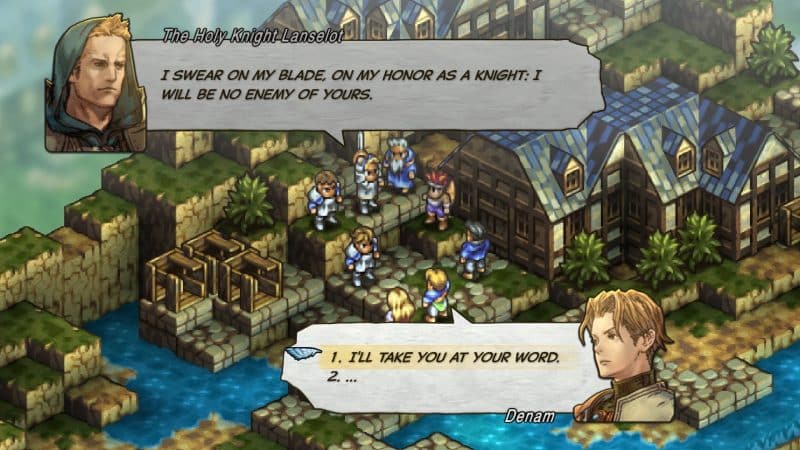 It’s really hard for me to convey my feelings toward Tactics Ogre without trying to give any specific examples. So here is one, in a later section, you are asked by a guard to enter the castle unarmed and alone. If you don’t go out of your way to unequip your gear on Denam and set up a party only composed of you, that guard will get really angry with you. Some dialog options mid-combat only pop up if you have the right character with you in your party. It’s why you want to try and keep everyone alive.

I will sing its praises to the end of time and I’m more than happy that what was once condemned to be a niche masterpiece no one had ever played. It’s finally accessible on almost every platform with some modern quality-of-life changes and will easily consume some 200 hours of my life again. The only thing I do bemoan is the lack of a multiplayer mode. Being able to download and compete against other players’ armies was some of the most fun I had on my PSP back in the day.

But I’ll say it once more, Tactics Ogre: Reborn is a great remaster of what is easily one of my favorite games of all time. Tactics Ogre itself is an incredible experience and reminds me why I love video games as much as I do. Such a complete game, such a complete work of art in which every aspect feeds into each other to craft a narrative that puts even modern titles to shame.

Obviously, I want everyone to play this. If you have any interest in a Tactical RPG that you can sink your teeth in and spend hours mini-maxing your troops only to lose them. There is a reason why Tactics Ogre, after 27 years, is still considered one of the best games in the genre. Tactics Ogre Reborn is available on Nintendo Switch, PlayStation 4, PlayStation 5, and PC.

If you want to read more reviews and news all around the latest in the world of esports, check us out here at ESTNN