Here’s how you can unlock Slardar in Cavern Crawl during Battle Pass 2022.

Most of the Dota 2 players who have purchased the Battle Pass 2022 are using it to unlock Mythical sets for Slardar, Juggernaut, and Crystal Maiden. These stunning sets are available through the Cavern Crawl challenge that is a part of the Battle Pass. You have to win several games with support, utility, and carry heroes to be able to achieve these sets for the 3 heroes.

Slardar is a Strength hero who is exceptional at initiating combat in Dota 2. Gamers preferring to play the tank role for their team choose Slardar for his prowess in battle. His abilities and stats in the game can turn him into a natural predator who can seek and destroy enemy heroes anywhere in the map. He is particularly dangerous to fight head-on in the river.

The Stonefish Renegade set for Slardar can be unlocked at the left corner of the Cavern Crawl with the Battle Pass 2022. The Mythical set includes an item for his Head, Back, Arms, and Weapon slots.

The newly introduced set for Slardar drapes the Strength hero in sophisticated armor that has been made using the materials gathered from the depths of the ocean. Slardar’s Weapon included with the Stonefish Renegade set decorates it with a nautilus shell on one end and a severed crab’s claws on the other end.

The Head slot of the Stonefish Renegade set for Slardar has a sharp blade attached to his forehead. His Arms slot has elongated bracers that are maroon and yellow. The Back of his head is serenaded with a turquoise leaf and has a glow that captures the attention of Dota 2 players. His tail is protected with multiple layers of armor that let Slardar roam the map with ease.

Watching Slardar bash enemy heroes with the Stonefish Renegade set can be visually stunning. The Ambient Effects of the Mythical set also make it incredible to see Slardar use Guardian Sprint to chase opponents down during team fights. 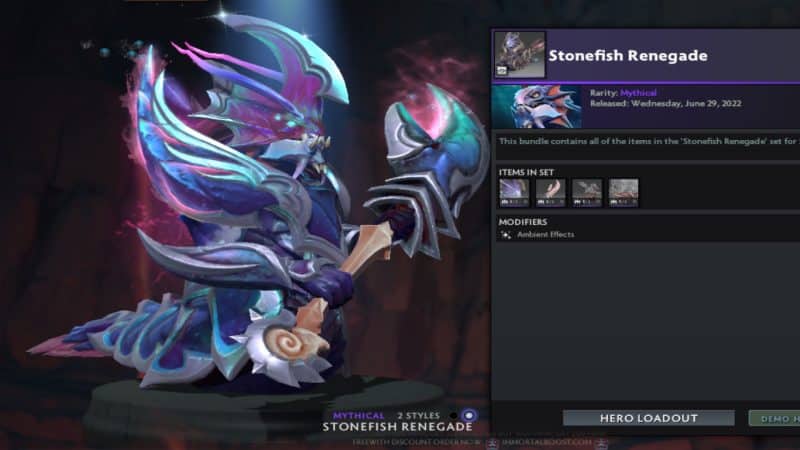 You can play more utility heroes toward the left of the Cavern Crawl to find Style Unlock Fragments for the Stonefish Renegade set. These fragments can be used to obtain additional skins for the Mythical set, including the Transmuted look for Slardar.

You need to choose utility heroes to make your way toward the Stonefish Renegade set for Slardar in Cavern Crawl. These durable heroes can take on massive amounts of damage and distract the enemy heroes while your allies finish them off.

Take a look at the best heroes you can pick to unlock the Mythical set for Slardar with the Battle Pass 2022. Legion Commander is a tank hero who can wreck enemy teams with her sheer strength. The melee hero has a base movement speed of 330 and base armor of 3. She has attack damage of 60 – 64 and a base attack time of 1.7. Her skills make Legion Commander an outstanding carry hero in Dota 2.

She has 700 HP and 315 mana at level 1. Legion Commander has a base Strength of 25 and gains 3.3 Strength per level. She can nuke waves of enemy creeps in the lane to obtain bonus movement speed on the battlefield.

If you’re outnumbered in the lane or the forest, Overwhelming Odds is an active ability that can be cast in a 360 radius. It deals bonus damage to creeps and enemy heroes based on the number of units found inside the radius of the spell. The ability also deals 25% bonus damage to illusions and grants additional movement speed for 7 seconds. It has a 15 second cooldown and requires 130 mana to be cast.

You can also heal your teammates and yourself using Press the Attack. It provides up to 140 attack speed and 60 health regeneration for 5 seconds. Legion Commander can equip items such as Maelstrom, Desolator, and Daedalus to rip through enemies while Press the Attack is activated.

Moment of Courage lets the Legion Commander land a counterattack that provides an 85% Lifesteal on her physical attacks. It has a minor cooldown of 0.7 seconds. She can disable enemies and force them to attack her for 5.5 seconds using her ultimate ability, Duel.

A successful Duel will grant Legion Commander permanent bonus damage. Duel has a 50 second cooldown and needs 75 mana to be used in battle. You can increase the attack damage gained through Duels at level 10 through the Talent Tree. Players can also purchase an Aghanim’s Scepter to increase the duration of Duel and reduce its cooldown. You’ll definitely encounter Abaddon while playing Cavern Crawl with the Battle Pass 2022. Abaddon is a Strength hero with a base movement speed of 325 and base armor of 2.8. He has attack damage of 50 – 60 and can use his abilities to slow down enemies with each strike from his frost-infused blade.

The melee hero has a base Strength of 22 and gains 2.6 Strength per level. He can use Mist Coil to deal 260 damage to enemy heroes and heal allies for 260 health. Mist Coil has a cast range of 575, has a low mana cost of 50, and a cooldown of 5.5 seconds. It also deals 130 damage to Abaddon every time he casts Mist Coil in the game.

He can use Aphotic Shield on team members and on himself to absorb incoming damage. The magical spell can take in up to 200 damage from all sources before exploding and dealing burst damage to all enemy units in a 675 radius. Aphotic Shield lasts for 15 seconds and has a cooldown of 6 seconds. It costs 130 mana to be used in battle.

Curse of Avernus is a passive ability that affects creeps, neutrals, enemy heroes, and towers. It decreases the movement speed of opponents with each successive strike. If the opponent is hit with 4 successive hits, Curse of Avernus silences them and grants bonus attack speed to Abaddon and his allies for 4.5 seconds. Visage is an Intelligence hero with a balanced set of skills. You can choose Visage to stun enemies and destroy towers on multiple lanes. Visage has a maximum range of 600 on his physical attacks and has attack damage of 45 – 55.

He has a base movement speed of 285 and base armor of 0.8. Visage has 640 HP and 339 mana when you spawn in the game. He has base Intelligence of 22 and gains 2.9 Intelligence per level. You can play a support role or a tank role with Visage, depending on the heroes you are up against in Dota 2.

Grave Chill can be cast on enemy heroes to drain their movement speed and attack speed for 6 seconds. It has a cooldown of 10 seconds and costs 100 mana to use in the game. Gravekeeper’s Cloak can reduce incoming damage by 20% per layer. It can be stacked up to 4 times and has a maximum damage reduction of 80%.

You can use Soul Assumption on enemy heroes to get instant kills. Soul Assumption can consume 135 mana per cast and deals 70 damage per charge. It can be charged up to 6 times and has a cooldown of 4 seconds.

Visage can Summon Familiars at will to call upon flying units to help him in battle. The Familiars summoned by Visage have a max HP of 700 and attack damage of 75. You can turn Familiars into stone to stun enemies and heal the allied units.