Coming off the franchise’s most-profitable launch of all time with Modern Warfare 2, Call of Duty is keeping its foot on the gas with Warzone 2.0, the next iteration of Activision’s hit battle royale.

Warzone 2.0 is due out next week. Ahead of its launch, we’ve compiled key information to create this broad overview of everything you need to know about the next Warzone, including details on its release, gameplay changes, battle pass, and more.

Call of Duty: Warzone 2.0 will be released on November 16 for PS5, Xbox Series X|S, PS4, Xbox One, and PC. Like the first Warzone, it’ll be free to play and support both cross-play and -progression.

Those who want to jump into the action as soon as possible can preload Warzone 2.0 up to two days ahead of its release, beginning November 14 at 10 a.m PT/1 p.m. ET/6 p.m. BST.

The most obvious change coming to the new Warzone is the introduction of an all-new map called Al Mazrah. The new battleground will host 150 players and 18 points of interest, which Infinity Ward has previously detailed. Among the points of interest are an oasis, oil refinery, airport, observatory, villages, cities, caves, marshlands, and more.

Those who have been playing MW2 have already gotten a taste of the new map, as several multiplayer maps are subsections of Al Mazrah. This includes Al Bagra Fortress, Embassy, Zarqwa Hydroelectric, Taraq, Sariff Bay, and Sa’id.

Players can once again play solo or in teams of two, three, or four.

A notable change is also coming to the Gulag: these in-match matches will now be 2v2 instead of 1v1. Players will be paired at random and do battle with a second duo for a chance at a second life. Players will enter the Gulag with a pre-selected loadout, though better weapons and gear can be picked up near the center of the map.

Warzone 2.0 also introduces a second way to escape the Gulag — by killing an AI enemy named The Jailer, who holds a key to the prison. The Jailer will spawn toward the middle of the match. Defeating the Jailer will result in all four players spawning back into the main game. As Activision points out, this creates an interesting dynamic in which duos can choose to team up and take on the Jailer 4v1.

Part of the Jailer’s purpose is to speed up matches in the Gulag. On that same note, Infinity Ward has removed the Overtime mechanic; if both teams and the Jailer survive the match, all players will be eliminated from the game.

Infinity Ward has also tweaked the way the map shrinks throughout a match. The developer says to expect “variations within the circle collapse.” It may collapse as a single circle or split into two or three, with those circles merging toward the endgame. The way in which the circle shrinks will be randomized each match. 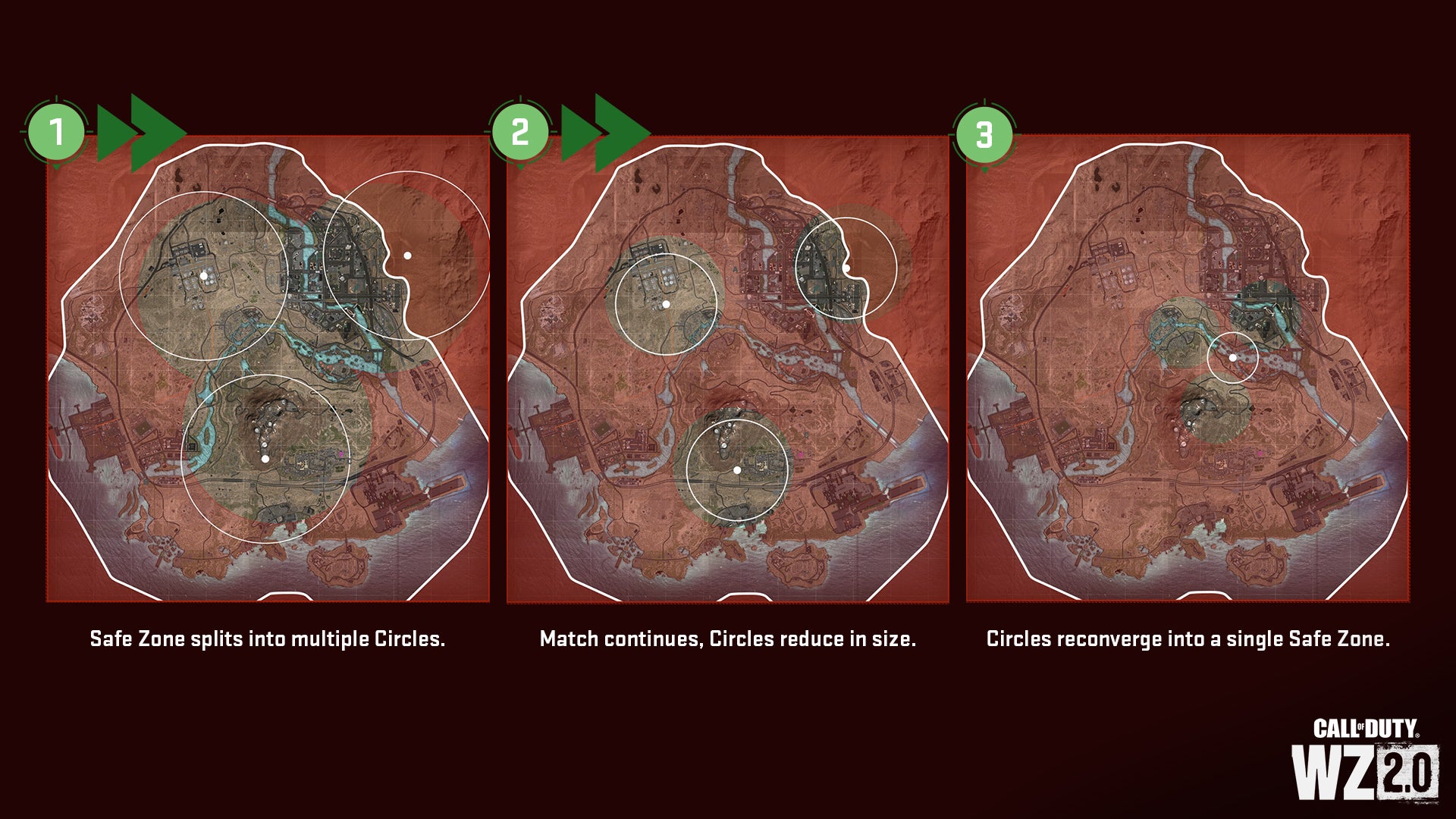 The new Warzone promises “combat across the land, sea, and air as the environment expands to include rivers, lakes, parts of the ocean, and more water-logged locations.” With so many new aquatic locations, Infinity Ward has seemingly done a lot of work on improving aquatic gameplay. While underwater, players will have the ability to fire sidearms, use melee weapons, throw knives, and deploy (at least some) lethal and tactical equipment.

As far as ground-based traversal goes, Warzone 2.0 allows players to both slide and dive, as well as hang from ledges, allowing you to peek above a ledge before mantling.

Vehicles will now run out of gas (though they can be refilled at gas stations or with gas cans), while enemy players can damage tires, doors, and shoot out windows (these, too, can be repaired at gas stations). Flat tires can also be repaired on the fly by simply hopping out and interacting with the tire.

Activision highlighted two new vehicles for Warzone 2.0: the Heavy Chopper, “which can hover in the air without a pilot,” and an electric Hummer.

Infinity Ward has yet to announce many details about interrogation, but it’s an interesting new mechanic that’s sure to add a wrinkle to strategizing. Interrogation allows you to interact with a downed enemy to reveal their squadmates’ locations. Players can once again create custom loadouts in Warzone 2.0. Loadouts can be obtained during in-match drop events or by clearing Strongholds (more on these below). The primary weapon from your loadout, meanwhile, can be obtained at shops (formerly buy stations) using in-match cash.

Al Marzah is also occupied by AI opponents, though these encounters will be optional. These opponents occupy Strongholds and only engage with you when attacked. Each match will feature multiple Strongholds. Clearing a Stronghold and disarming a bomb within it will net you and your team custom loadouts and a key to a Black Site.

Black Sites can only be accessed via the key obtained from being the first team to clear a specific Stronghold. Black Sites house even more dangerous AI combatants, though they offer even greater rewards: a permanent weapon blueprint and additional in-match items.

Like MW2’s multiplayer, Warzone 2.0 will introduce third-person playlists. In these playlists, the typical first-person perspective is dropped in favor of an over-the-shoulder view of your character. Infinity Ward says this allows for “different visibility tactics” and an “altered” gameplay experience. The playlists will be added to the weekly rotation during Season 1.

Infinity Ward has also announced DMZ, “an open-world, narrative-focused extraction mode” within the new Warzone. The developer said in DMZ players “have free rein to complete faction-based missions, take on additional side objectives, engage with enemy operators or AI combatants, and search for valuable items, all while fighting to survive toward exfiltration.”

The MW2/Warzone 2.0 Battle Pass will operate a bit differently than past battle passes. Rather than a linear set of rewards, the Season 1 Battle Pass spreads its goodies across a multi-sector map. Rather than simply progressing along the pass and through the predefined rewards, players will earn tokens they can spend to unlock a new sector on the map or an item within a previously unlocked sector. The new system is designed to increase player choice, as you’ll be able to work toward specific skins, blueprints, and/or weapons.

What Happens to the Original Warzone? 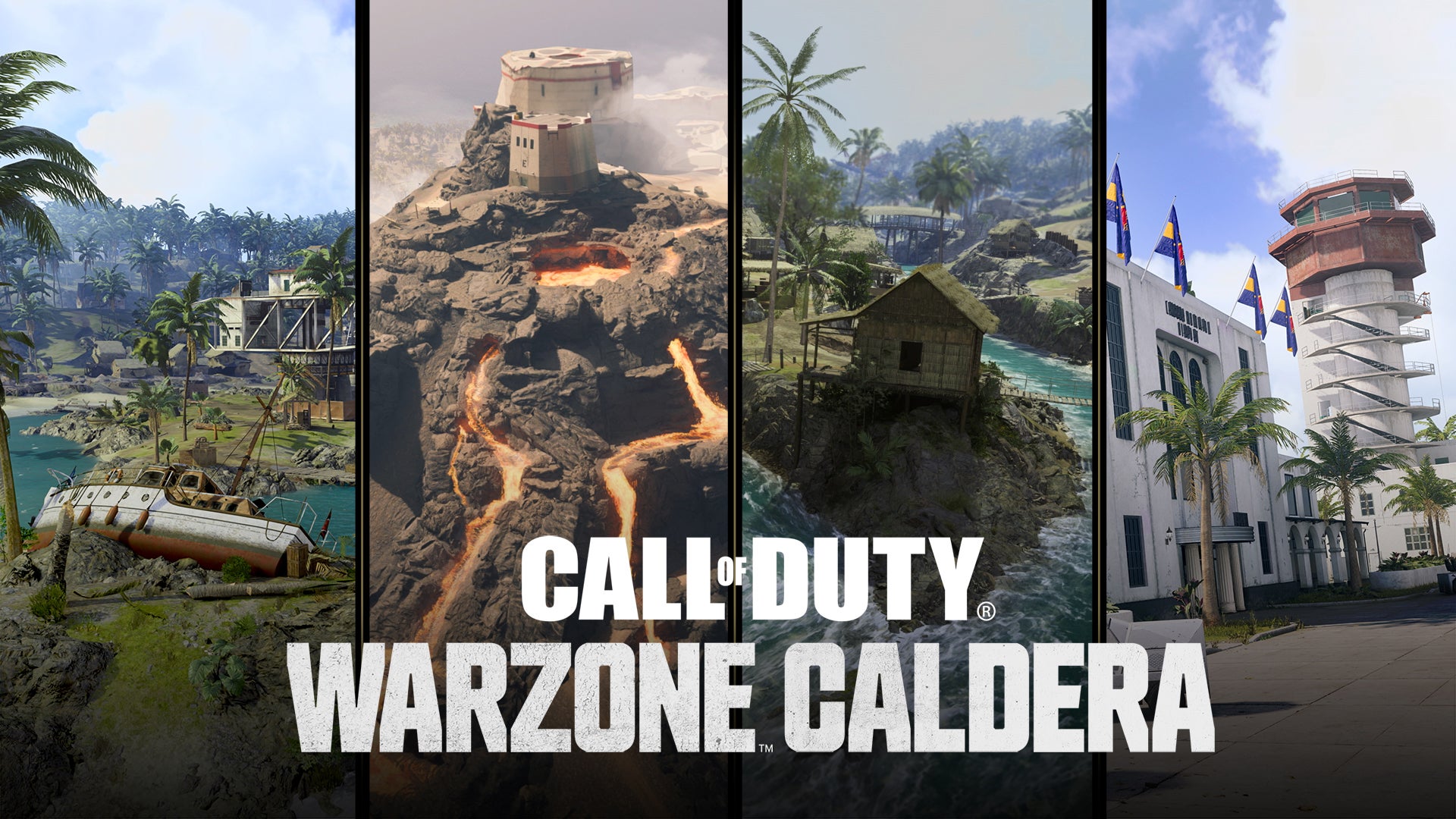 At 8 a.m PT/11 a.m. ET/4 p.m. BST on November 16 (two hours before Warzone 2.0 launches), the original Warzone will be taken offline for twelve days. It will be relaunched as Call of Duty: Warzone Caldera on November 28.

The old Warzone won’t have an in-game store, though your CoD points can be transferred between games. Activision also notes the Rebirth Island and Fortune’s Keep maps will be removed ahead of Caldera’s relaunch.

Jordan covers games, shows, and movies as a freelance writer for IGN.