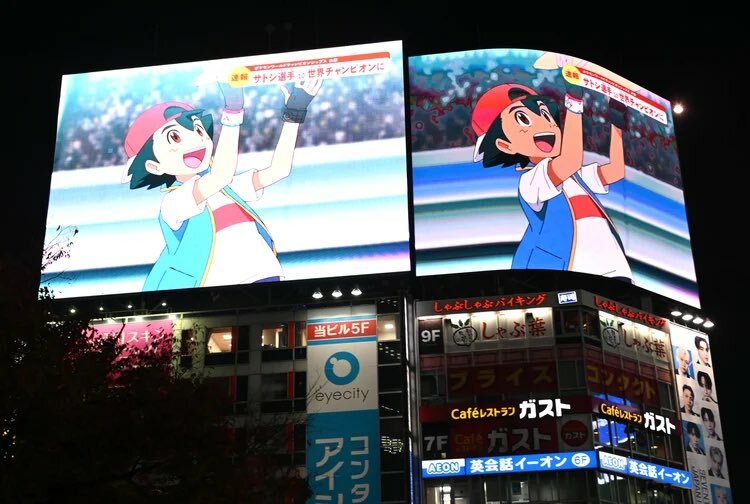 As you’ve no doubt heard, Ash Ketchum has recently accomplished a major victory in the Pokémon anime. Since the episode has yet to air in English we won’t be giving specifics on the victory until after the jump for people who wish to remain unspoiled. If you’re fine with spoilers or are aware of the news already than read on!

Ash recently defeated Leon in the Master’s 8 tournament, earning him the title of World Champion, and Japan was ready to celebrate! As you can see in the above tweet from the Pokémon anime’s PR account, footage of Ash’s victory was broadcast in Japan’s famous Shibuya Crossing.

Here’s a rough translation of what the tweet has to say…
(Note: “Satoshi” is Ash’s name in Japanese)

The news that Satoshi became the world champion will be broadcast on a large screen in Shibuya, Tokyo 👀

Is there anyone who happened to see it in Shibuya?

As someone who’s been on and off following the Pokémon anime from the beginning I can’t deny I got a little teared up seeing Ash finally be crowned a master. There’s no telling where the Pokémon anime will go from here, if Ash will continue his journeys or a new trainer will become the protagonist.

No matter what happens we will always have this special moment where Ash Ketchum of Pallet Town was the very best, like no one ever was.